Home » PARKS AND GARDENS » Walter Sisulu NBG » Kalanchoe rotundifolia
Back to Category Overview
Total images in all categories: 9,574
Total number of hits on all images: 4,303,447 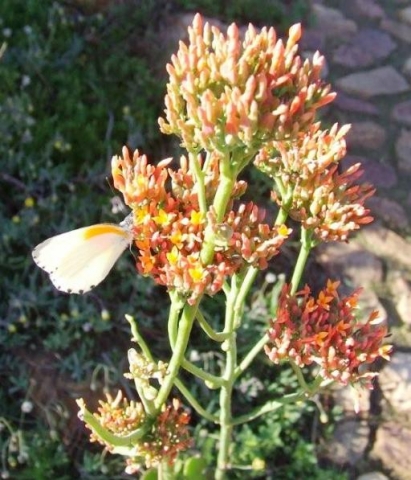 Kalanchoe rotundifolia is a succulent with slender, erect flowering stem, usually shorter than 1 m. The leaves usually seen are elliptic, the botanical name says round; botanical names apply to all forms of a species until an official change is announced.

K. rotundifolia occurs widely in the eastern parts of South Africa, in Zimbabwe and widespread in Africa. It seeds itself once established in the garden, but can be planted from cuttings. The plant contains a toxic substance that causes an illness in sheep and cattle, called loco disease (krimpsiekte in Afrikaans).

The pollinator butterfly is common in Gauteng during autumn, the plant's flowering season. The inflorescence is a many-flowered, flat-topped cluster. This photo was taken in the Walter Sisulu National Botanical Garden in May.