Home » PARKS AND GARDENS » Walter Sisulu NBG » Euphorbia cooperi
Back to Category Overview
Total images in all categories: 12,086
Total number of hits on all images: 7,387,299 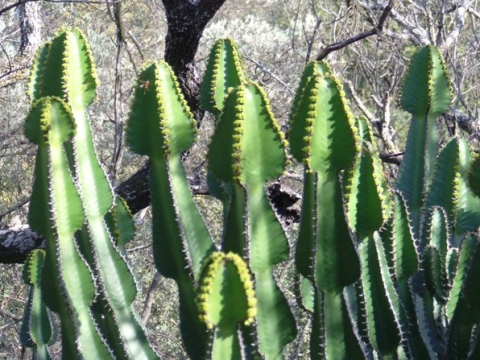 Euphorbia cooperi has very attractive stems. The distinctive upper stem shapes found on this succulent tree makes it one of the popular members of its generally attractive genus. When the yellow cyathia appear, it is even more spectacular. It is said to flower in September and October, but this photo was taken early in June in the Walter Sisulu National Botanical Garden.

In populations of living organisms there are usually normal distributions of performance on variables in which individuals differ. In plants it may mean that measurements or observed behaviour of some few specimens will fall outside the normally expected range. It may also mean that an unusual season or geographical area has been encountered. In humans the feature is called genius, star or hero if the exception is to the positive or desirable side; and freak, villain or idiot if the deviation is negative.

Plants, animals, insects or frogs have their own specific parameters in the normal distributions of physical features or behaviour attributes in which one should expect variations within the normal range and a few unusual, extreme results.

You won't find E. cooperi growing naturally in the Bankenveld area in Gauteng. If you plant it there and treat it differently to how nature accommodates it, its behaviour and appearance may be surprising or a disappointment. Similarly, if the climate changes as is happening these days, living species are bound to spring surprises.

The same as what the children do when the house rules are not enforced or what the mice do when the cat's away (Coates Palgrave, 2002).