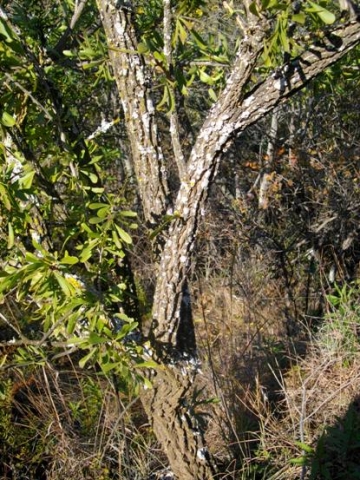 The deeply fissured, corky bark found on old Gymnosporia buxifolia stems is shown in this photo taken in the Walter Sisulu National Botanical Garden. This mature stem appearance is present in a specimen not nearly as tall as the 9 m sometimes achieved by the species and on stems not yet particularly thick.

Still, this tree is no youngster. It has painstakingly established itself over the years, given the resources at its disposal. The roots are not aggressive, the tree often in undergrowth among taller trees. Some foliage is present on the young twigs fairly low down on the stems.

Spines have disappeared from the old stems in picture, as occurs commonly. Pale patches of lichen have, however, long ago made these stems their home, spreading abundantly (Coates Palgrave, 2002; www.witkoppenwildflower.co.za).