Home » PARKS AND GARDENS » Walter Sisulu NBG » Gomphocarpus physocarpus with flowers, buds and rings
Back to Category Overview
Total images in all categories: 9,736
Total number of hits on all images: 4,370,817 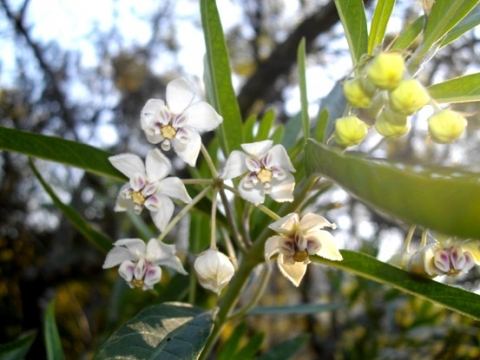 These white and cream coloured flowers of the balloon milkwood, with proper name Gomphocarpus physocarpus, were photographed in the Walter Sisulu National Botanical Garden in May. A second cluster is nodding above the open flowers, comprising pale green, globose buds, ridged where the corolla lobes will soon part and spread.

The five pointed, in-curving corolla lobes of the open flowers form a base for the boat-shaped corona lobes, positioned in a second ring in the centre above the corolla. Right in the middle there is a third ring. The tiny, yellow style head with five rounded lobes completes this third concentric ring, each ring made up of five parts.

Look for the rings in other Gomphocarpus flowers. And the five tiny sepals of the calyx behind the corolla that constitute a fourth ring (www.plantzafrica.com).