Home » PARKS AND GARDENS » Walter Sisulu NBG » Solanum giganteum leaves hairless above
Back to Category Overview
Total images in all categories: 8,897
Total number of hits on all images: 3,867,653 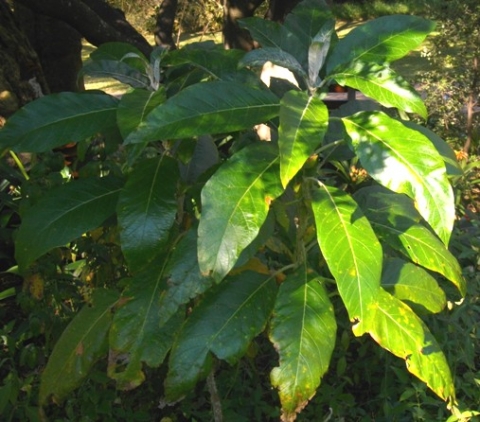 A Solanum giganteum plant without recent growth may have only hairless upper leaf surfaces. Such dark green and shiny ones are present in June on this Walter Sisulu National Botanical Garden specimen. This is when Gauteng is dry and many plants don’t grow new leaves at all. The white woolliness on lower leaf surfaces and on the stems is still there though.

The white, mauve or violet five-pointed, star-shaped flowers of S. giganteum appear in branched terminal heads only during summer and autumn. Thick cylindrical anthers around the base of the white style, much longer than the stamens, look rather similar to the flower centre features of several other South African Solanum species. The flower pedicels and calyces are white with the typical woolliness.

The fruits are shiny, spherical berries that are initially green and later red. They grow in flat-topped clusters by late summer and autumn, a fruit becoming about 1 cm in diameter (Coates Palgrave, 2002; Van Wyk and Van Wyk, 1997).