Home » TYPES » Mesembs » Malephora crocea
Back to Category Overview
Total images in all categories: 11,506
Total number of hits on all images: 6,491,837 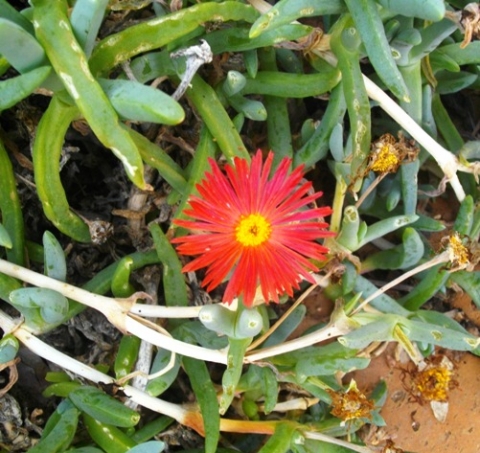 The coppery mesemb, as Malephora crocea is commonly known, is a South African plant enjoying a wide distribution in international horticulture. It is for instance found in the southwestern parts of the United States, where it serves as a groundcover in gardens and a firebreak plant, but also invaded as a weed causing some problems in coastal habitats.

The leaves are soft, succulent and finger-like, more triangular in cross-section than cylindrical. Leaf surfaces are covered by a waxy layer.

The coppery petals growing in about two whorls around the yellow centre are narrowly oblong, their tips rounded to slightly pointed. Blooming occurs in summer, while the genus has some winter flowering species as well. These flowers open in the middle hours of sunny days.

The species occurs in the Western Cape and the Northern Cape, growing on arid sandy flats and slopes. The species is not considered to be threatened in its habitat early in the twenty first century (Smith, et al, 1998; Wikipedia; http://redlist.sanbi.org).