Home » TYPES » Mesembs » Khadia carolinensis fruit
Back to Category Overview
Total images in all categories: 11,901
Total number of hits on all images: 7,141,692 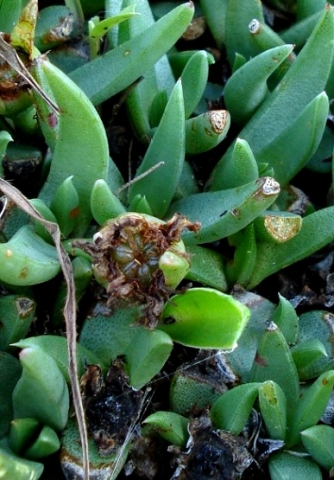 Khadia carolinensis is one of only six species in a genus named after the Sotho word khadi that denotes the starchy roots of K. acutipetala. The roots of that plant, also depicted in this Album, are used as a fermentation agent in brewing beer. All the Khadia species are found in South Africa north of the Vaal River. Khadia plants all have large woody root systems.

A fleshy red fruit capsule, still young in this photo, shows the characteristic large valve rims on the top of the six locules, the chambers within which the seeds are being formed. Some older, woody capsules are also visible lower down in the picture. These capsules, further down the seed production line, are by now blackened on top while the desiccated sepal tips are still present.

The scattered leaf spots that appear dark and translucent here, are sometimes less conspicuous on Khadia carolinensis. Leaf damage is also visible. This often occurs from the plant being grazed by animals, although such sacrifice usually does not constitute a survival problem for the plant (Smith, et al, 1998; www.plantzafrica.com).