Home » TYPES » Mesembs » Malephora lutea
Back to Category Overview
Total images in all categories: 11,506
Total number of hits on all images: 6,491,722 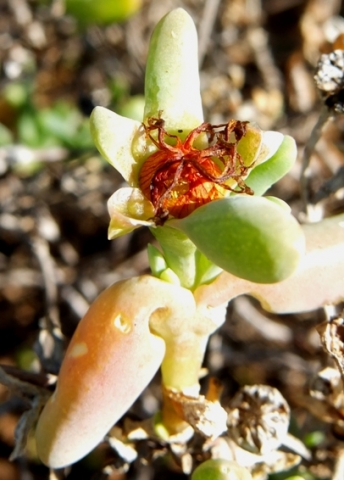 Malephora lutea, in Afrikaans the geelvingerkanna (yellow finger canna), is a prostrate leaf succulent that roots at its branch nodes.

Malephora is derived from the Greek words male (armhole) and pherein (to bear), referring to the distinct internodes on the pale and fleshy upper stems. The genus comprises about 15 species found mostly in South Africa, but also in Namibia. Malephora flower colours may be yellow, orange or pink.

The distribution of M. lutea includes the Little Karoo and some inland parts of the Eastern Province. It grows in lowland flats in loamy soil, but is not seen in renosterveld or fynbos.

A species seeking out the bare patches and disturbed land where it may thrive, it is not threatened in habitat early in the twenty first century (Vlok and Schutte-Vlok, 2010; Smith et al, 1998; Wikipedia; www.redlist.sanbi.org).