Home » TYPES » Mesembs » Leipoldtia schultzei
Back to Category Overview
Total images in all categories: 11,921
Total number of hits on all images: 7,168,546 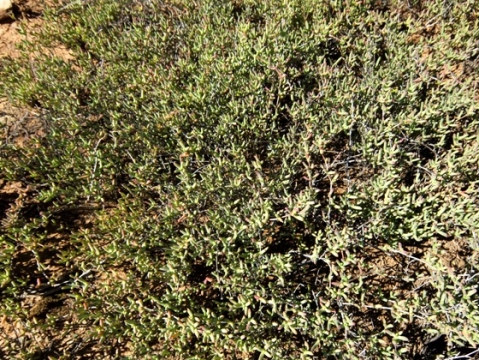 Leipoldtia schultzei, in Afrikaans commonly known as the rankvygie (runner mesemb or rambling mesemb), is a sprawling shrublet, a leaf succulent that often roots where stem nodes touch the ground. This is the only member of the Leipoldtia genus found in the Little Karoo.

Leipoldtia plants are generally best identified by their flattish grey fruit capsules that have ten, sometimes up to sixteen locules. The capsules fortunately persist on the plants for a long time. The sprawling habit of the plants is shared with several members of the large Ruschia and Lampranthus genera; Leipoldtia plants are often referred to in Afrikaans as kussingvygies (cushion mesembs).

L. schultzei grows in gravelly sand flats and slopes from Namaqualand to Humansdorp in the Eastern Cape. This plant was seen near Oudtshoorn in April. The population in habitat is considered to be stable, the plant not threatened early in the twenty first century (Vlok and Schutte-Vlok, 2010; Schmidt, et al, 1998; www.redlist.sanbi.org).