Home » TYPES » Herbs » Geigeria ornativa subsp. ornativa
Back to Category Overview
Total images in all categories: 11,506
Total number of hits on all images: 6,499,094 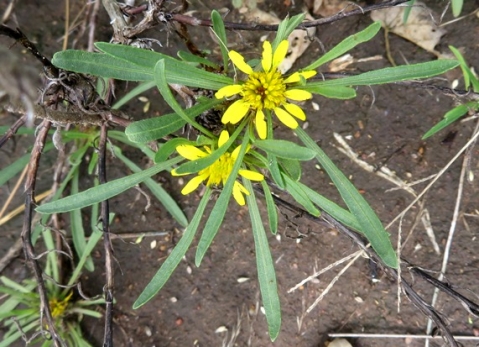 Geigeria ornativa subsp. ornativa, commonly known as vermeerbos, is a small annual or a short-lived perennial growing from a woody rootstock, typically 10 cm tall. The short, branched stems are sometimes reddish and prostrate.

The long, narrow leaves clustered near stem tips are ribbon-like, linear to oblanceolate, the widest part nearer the tip than the base. The leaf tip may be rounded or pointed, the base tapering. The dull green leaves with pale midribs are covered in short glandular hairs that give them a sandpapery texture. Leaves become about 10 cm long.

This is a highly toxic plant, especially to sheep and goats. The vermeerbos gets its common name from Vermeersiekte (Vermeer’s disease), one of the stock diseases causing problems for farmers.

Although distributed in most South African provinces (apart from KwaZulu-Natal and maybe Gauteng), the plant is mainly found in the central and northern parts and more widely in southern Africa, for instance Namibia. This is the only subspecies of this plant occurring in South Africa. The photo was taken in the Mjejane Game Reserve.

The habitat of this plant is mostly the semi-arid inland regions where the plants grow in several soil types, favouring calciferous soils. The plant is not considered to be threatened in its habitat early in the twenty first century (Vahrmeijer, 1981; Onderstall, 1996; iNaturalist; http://redlist.sanbi.org).