Home » TYPES » Herbs » Gerbera jamesonii
Back to Category Overview
Total images in all categories: 12,068
Total number of hits on all images: 7,363,043 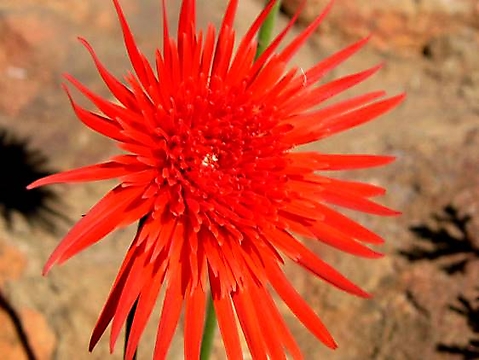 This Gerbera jamesonii flowerhead does not quite conform to the features of the plant found in nature. There are too many rows of shorter ray florets around the centre in this double flowerhead. Many enhanced cultivars produced in horticulture add flower colours and shapes to plants found in gardens worldwide.

Gerbera ray florets are usually female. They are two-lipped, the outer one strap-shaped and large, the inner lip two-lobed and small. The fertile, five-lobed disc florets in the centre are tiny. They are also two-lipped with curled petals.

This perennial herb becomes up to 70 cm tall, the height contributed by the long naked peduncles of the flowerheads. G. jamesonii grows tufted, its leaf rosette consisting of long-stalked, lobed and toothed, sometimes undulating leaves. The leaves are hairy on the margins, not much elsewhere.

The species distribution is in Mpumalanga, Limpopo and Gauteng, also in Swaziland. The plants grow on rocky slopes in grassland and woodland, often in shaded spots and well-drained, sandy soils. The species is not considered to be threatened in its habitat early in the twenty first century.

The Jameson who brought this daisy from Barberton for promoting its planting in gardens in the 1860s had a son called Jacaranda Jim. The father was honoured in the specific name of this daisy, i.e. jamesonii. The town was recognised in the plant’s common name of Barberton daisy.

The son? The Jacaranda Jim nickname came from being well-known as the beautifier of Pretoria streets by initiating and driving the planting of jacarandas. He was a town engineer and tree-planter in several more places, including Kimberley and Nairobi, Kenya.