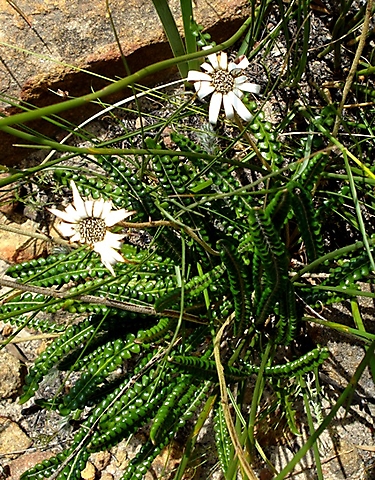 Gerbera linnaei, commonly known in Afrikaans as the varingblom (fern flower) and previously as G. asplenifolia, is a tufted perennial reaching 40 cm when in flower.

The species is endemic to the Western Cape, its distribution in the southwest of the province from the Cape Peninsula to Stellenbosch and Swellendam. The photo was taken on the western slope below Sir Lowry’s Pass.

The habitat is lower fynbos slopes among stones in sandy soils. The species is not considered to be threatened in its habitat early in the twenty first century (Manning, 2009; Bond and Goldblatt, 1984; Kidd, 1983; iNaturalist; www.gerbera.org; http://redlist.sanbi.org).