Home » TYPES » Herbs » Gerbera linnaei flowerhead
Back to Category Overview
Total images in all categories: 12,081
Total number of hits on all images: 7,379,272 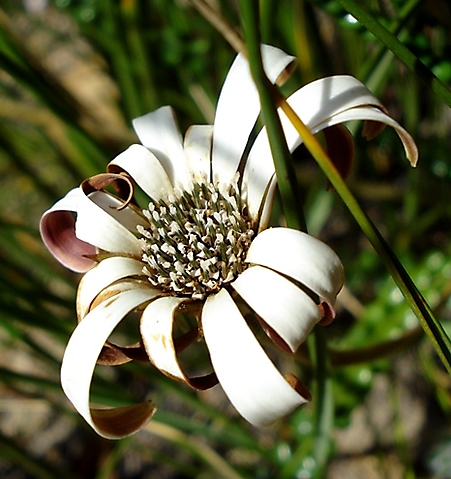 The flowerhead of Gerbera linnaei grows solitary on a long peduncle with sparsely spaced, scale-like bracts. The young scape is cobwebby particularly at its base, later losing much of its hairiness. Several flowering scapes will emerge from a well-developed leaf tuft or bunched rosettes.

One whorl of cream to pale yellow and occasionally pink-purple ray florets grow around a many-flowered disc; that is if the purplish form does not involve hybridisation. The outside surfaces of the rays are maroon or purple, sometimes streaky.

In picture the rays recurve much, the flowerhead probably old and the open disc florets having tiny, white petals. Flowerhead diameter is from 2 cm to 3,5 cm.

Flowering happens from before midspring to after midsummer, mostly after fire. The photo was taken at the end of October in young fynbos (Manning, 2009; Bond and Goldblatt, 1984; Kidd, 1983; iNaturalist; www.gerbera.org).