Home » HABITAT » Forests » Carissa wyliei leaves
Back to Category Overview
Total images in all categories: 10,534
Total number of hits on all images: 5,183,658 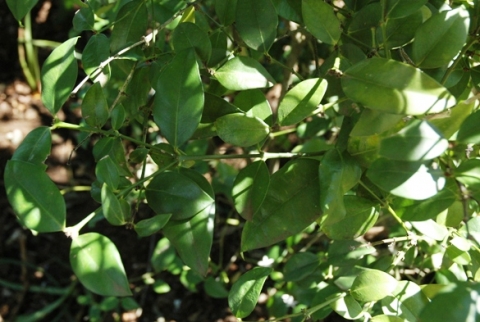 Previous
Image 4 of 26
Next

The large-flowered forest num-num, as Carissa wyliei is commonly known, grows (often scrambles) in forest under-shrub to heights up to 4 m (SA Tree List No. 640.7).

The simple leaves are opposite on petioles only up to 3 mm long. Leaf shape is ovate; the broadly tapering tip has an added bristle, a rounded base and entire margins. Leaf colour is dull to glossy green, sometimes bluish green above and paler below. The leaf texture is leathery, the pale midrib conspicuous, but the ascending lateral veins that curve in to join the next (upper) one rather than reaching the margins, are indistinct. Leaf dimensions are up to 10 cm long and 4,5 cm wide.

The species distribution is limited to a few places in coastal forests and forest margins of KwaZulu-Natal and the Eastern Cape where it thrives in shade. As it sometimes has sharp little spines, forked as is common among Carissa species, this is one of those forest obstacles that interfere with human and animal movement under the trees. There are records of spineless C. wyliei bushes, meaning without spines, not lacking backbone.

C. wyliei is recommended as a shrub for frost-free gardens in partial shade, grown for its foliage and scented flowers. It is grown from cuttings (Coates Palgrave, 2002; Pooley, 1993).