Home » HABITAT » Forests » Heteropyxis natalensis branch
Back to Category Overview
Total images in all categories: 10,346
Total number of hits on all images: 5,047,274 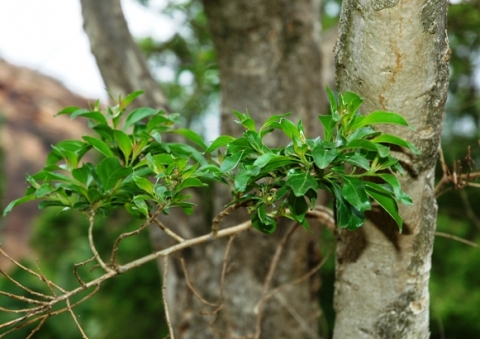 The flower fragrance is matched by a lavender scent exuded when leaves and twigs are crushed, warranting the lavender of the common name, while the sometimes added weeping refers to the drooping leaves.

The species distribution includes KwaZulu-Natal as the name suggests, but also the provinces north of the Vaal River, as well as Swaziland and Mozambique. When a plant name indicates a place, province or country, it usually refers to the botanic history of first recording of the species, not exclusivity of its distribution in nature.

Plant species endemic to very limited areas, like one district or province may, however, have more geographic significance to the given name (Coates Palgrave, 2002; Schmidt, et al, 2002).