Home » HABITAT » Forests » Justicia aconitiflora flowers
Back to Category Overview
Total images in all categories: 10,534
Total number of hits on all images: 5,183,737 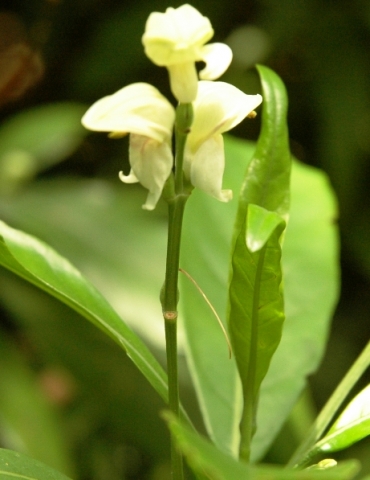 This lesser known South African Justicia, previously Duvernoia, found in a smaller geographical distribution than its more illustrious relative, Justicia adhatodoides, is called J. aconitiflora. It has narrower leaves and mainly cream flowers, although there are also some small purple markings in the corolla throats. Flowers grow in opposite pairs as in the photo.

Found along forest margins and riparian bush, the plant does not bring height, but contributes to populating forest understoreys, albeit in the parts where openings to the sun are more abundant.

Forest understoreys or underbrush are characterised by limited light penetrating the canopies above and populated by shade tolerant plants. In return for the light shortage, these shorter plants enjoy greater humidity, less wind and less temperature fluctuation.

Plants with low light requirement will still grow more lush and dense when the death of a tall tree allows a break in the upper canopy. This is also the chance of saplings of tall tree species, patiently making their way to the top at much slower rates than when their forefathers first shaped the forest, to respond in a vigorous burst of growth, presenting leaves of their own among those of the big guys right at the top.

Underbrush vegetation tends to respond earlier in the growth season, capitalising on opportunity before the tall trees cast summer darkness below. Dogwood and holly are typical examples of understorey adjusted species.

There is more on Justicia in the eponymous Album on this Site (Coates Palgrave, 2002; iNaturalist; Wikipedia; www.plantzafrica.com).