Home » HABITAT » Forests » Murasie near Oude Muragie
Back to Category Overview
Total images in all categories: 10,220
Total number of hits on all images: 4,872,754 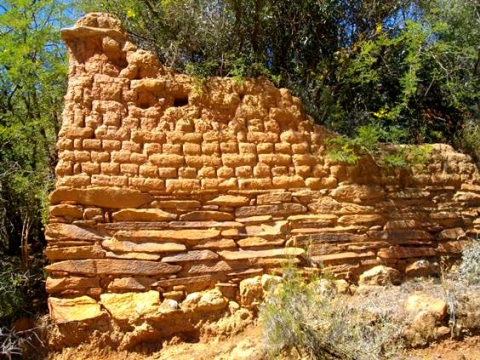 Once upon a time there was a neatly cleared yard around the lone house in the bush, maybe a proper farmyard. Murasie means ruin in Afrikaans. Oude Muragie is a place name meaning old ruin, from the earlier Dutch. Visit it near De Rust in the Little Karoo.

People probably lived a quiet life here in olden times. Close to nature, the bush, birds and animals constantly around them, the people attuned to different environmental signals than most people today.

Does our science have the capacity to measure slow change in the transformation of our own species? Absurd question! If anything was the matter, the authorities would have known!

Apart from those aiming to eat something living in the neighbourhood as an everyday event, all species tended to respect each other’s space, i.e. gave each other a wide berth. Domination by one super-species, the humans, did not yet happen in the good old days. Simply be careful and you stayed alive in the days when there was still balance of power among the species.

The problems people faced in those days must have appeared as large as ours do today. Life was tough for all, people struggling against their challenges and challengers as all else did.

How different is today? The old-time good life is romantically envisaged, longed for by the children of the crowded earth. Are those that do not miss nature brainwashed, reduced to robotic performance or conditioned happiness? Or superior, more civilised, more advanced on a good road?

The din of urban hustle and bustle may imperceptibly be ousting the quiet of the bush. Does this mean the technology driven superspecies is taking control and all is good?

A ruin of the old order now appears handsome, decay a work of art. Who can still build like this? Who would want to? We’re beyond that, so advanced and forward looking. Sometimes made to wonder whether wonderworld lies ahead or behind.