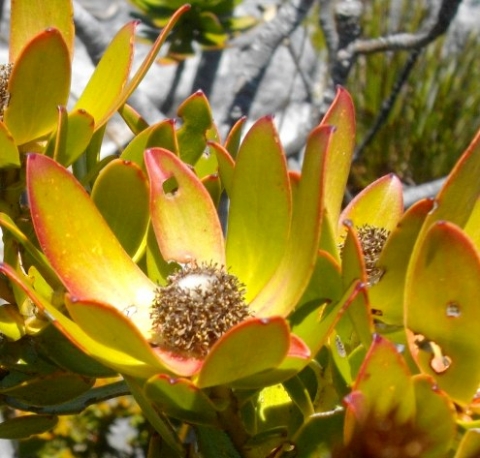 The male shrubs of Leucadendron strobilinum carry their pollen delivering florets in small stem tip cones of 2,4 cm to 3,6 cm in diameter, smaller than the female ones. The cones in picture have already performed their procreative duties by November when the photo was taken, the florets spent and dry.

The tips of the leathery involucral leaves are red and curving outwards just slightly.

As is typical of single-stemmed shrubs, the plant regenerates from seed and does not resprout after a veld fire. The species has a small distribution in an area where millions of people are active. It is considered near threatened early in the twenty first century (Manning, 2007; Clarke and Mackenzie, 2007; www.plantzafrica.com).