Home » GENERA I-L » Leucadendron » Leucadendron strobilinum on Table Mountain
Back to Category Overview
Total images in all categories: 9,742
Total number of hits on all images: 4,372,187 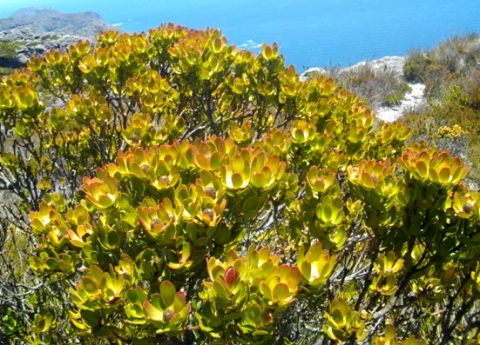 Leucadendron strobilinum, the Peninsula conebush or in Afrikaans the rotstolbos (rock conebush), is a robust shrub with a single, purple stem that branches from low down to spread widely, reaching heights of 2,6 m.

The leaves are broadly elliptic, growing more than 1 cm longer on the female plants. Leaf texture is soft, the margins fringed with soft white hairs when young, becoming leathery and hairless later. The involucral leaves at stem tips are slightly larger than other foliage and ivory coloured while the flowerheads are young. Red tips are evident on most of the involucral leaves in the photo taken on Table Mountain in November when flowering was over.

The plants mainly grow on south-facing, damp, sandstone slopes of the Cape Peninsula from Table Mountain to Kommetjie. Plants are found at middle to higher elevations among large rocks while this one grew right at the top (Manning, 2007; Clarke and Mackenzie, 2007; www.plantzafrica.com).