Home » GENERA I-L » Leucadendron » Leucadendron tinctum
Back to Category Overview
Total images in all categories: 9,840
Total number of hits on all images: 4,464,830 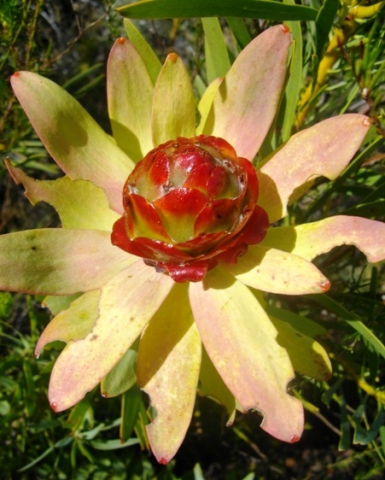 Leucadendron tinctum has some striking common names: spicy conebush, rose cockade and in Afrikaans toffie-appel. One can expect flamboyant naming for plants with highly noticeable or spectacular flowers.

The female plant depicted here grew this interesting reddish flower bud of which only the oily scales can be seen at this stage. They are surrounded by the colour transformed involucral leaves commonly found around flowers of this and some other Leucadendron species. Some damage is visible on the leaves, probably from insects eating them. The normal (other) leaves on the plant are grey-green, barely visible in the picture below the coloured ones.

Leaves are broad, oblong to elliptical, hairless with noticeable reddish glandular tips. The leaves on the male plant are sometimes more yellowish, compared to the grey-green ones on the female plant. The shrub is much branched from its single stem and appears bushy when well grown.

The future of this species has been reassessed, its prospects taking a turn for the worse: The plant is considered to be near threatened in its habitat early in the twenty first century (Manning, 2007; Eliovson, 1973; www.plantzafrica.com; www.redlist.sanbi.org).