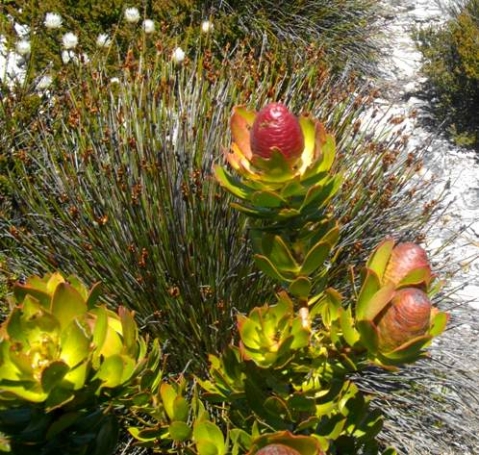 The female or fruiting cones of Leucadendron strobilinum in picture are longer than the surrounding involucral leaves that are already losing their pale, ivory colouring prevalent at bloom time.

The florets have by now disappeared from between the woody bracts of the cones. The photo is from November, the floral season having occurred in early spring. A yeasty scent was exuded by these female flowerheads when they were at their peak. Pollination was mainly carried out by small beetle species.

By now the cone is a compact, stem tip structure, hard and ovoid. It protects the young fruits until ripe and then dries out, while continuing its grip on the seeds through the sometimes long wait for a veld fire. Only then will the cone open and release the flat, winged seeds for dispersal on the wind (Manning, 2007; Clarke and Mackenzie, 2007; www.plantzafrica.com).