Home » GENERA I-L » Leucadendron » Leucadendron xanthoconus
Back to Category Overview
Total images in all categories: 8,906
Total number of hits on all images: 3,881,385 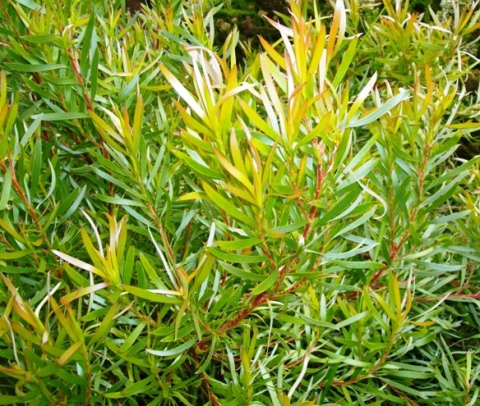 Leucadendron xanthoconus, the sickle-leaf conebush or in Afrikaans the blinkblaartolbos, is a shrub of up to 2 m with attractive silvery foliage. The leaves are densely spread over the many erect reddish branchlets, here lacking the yellow colouring of involucral leaves at stem tips when the cones form. The leaves are narrow and oblong, sometimes sickle-shaped and finely hairy only when young.

The cones appear at the end of winter with long yellow leaves around the base of each. Male and female cones of about 1 cm in diameter grow on separate plants. The female cones are light green, but may later turn pinkish or orange-pink. The seed, growing in the female cones, are retained and only released through fire.

This hardy shrub is considered to be still an underutilised garden plant that deserves more representation. The distribution of L. xanthoconus is the southern parts of the Western Cape, from the Peninsula to around Riviersonderend. Gardens offering the living conditions of this region might prove successful in hosting these plants.

The natural habitat of this species is sandstone lower slopes and flats in fynbos. The species is not considered to be threatened in its habitat early in the twenty first century (www.plantzafrica.com; Manning, 2009; www.bokkemanskloof.co.za; www.redlist.sanbi.org).