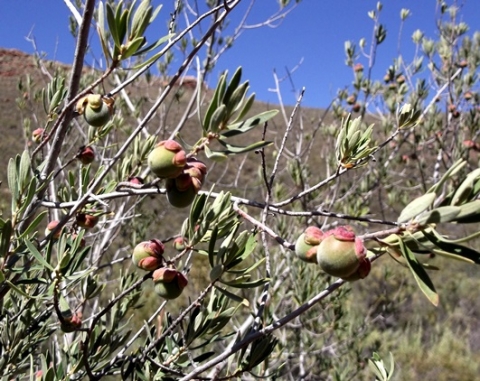 Previous
Image 3 of 44
Next

The hardy, much-branched, evergreen shrub becomes up to 3 m tall and spreads at least as widely. The pendulous cream flowers have five petals that recurve much. Flowering happens from late winter through spring.

The photo was taken in mountainous renosterveld not far from Montagu, bearing fruit at the end of March. This variety grows in the winter rainfall parts of the Western Cape and northwards to Namaqualand. None of the varieties of D. austro-africana is considered to be under survival threat in habitat early in the twenty first century.

All four varieties bear the common names of firesticks and kritikom, the stems having been used in lighting a fire through friction (Coates Palgrave, 2002; Van Wyk and Van Wyk, 1997; iSpot; www.pza.sanbi.org; www.redlist.sanbi.org).