Home » GENERA D » Diospyros » Diospyros austro-africana
Back to Category Overview
Total images in all categories: 11,506
Total number of hits on all images: 6,514,053 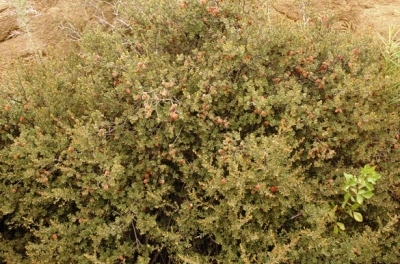 Previous
Image 1 of 44
Next

The firesticks, in Afrikaans jakkalsbos (jackal bush) or kritikom (Afrikaans from an early Khoi or San name), is commonly a shrub, occasionally a tree of up to 10 m.

This is one of the plants used by early South African tribes to make fire. Sticks were rubbed together rapidly with soft kindling at the ready for the spark, hence the name firesticks. And who knows what kritikom may have meant in the days when those languages were still heard.

Diospyros austro-africana has small, almost stalkless leaves, thick and stiff in texture. The leaves tend to be hairy on both surfaces, more so on the lower one. Plants growing in the inland Western Cape are less hairy. Leaf shape is narrowly ovate, the leaf tip rounded, the base tapering. Leaf size is mostly shorter than 1,5 cm.

The species distribution is widespread in the central and western parts of South Africa, also in the Eastern Cape and Free State. The habitat is varied, the plants tending to appear along rocky ridges and on rocky outcrops (Coates Palgrave, 2002; www.redlist.sanbi.org).