Home » GENERA D » Diospyros » Diospyros
Back to Category Overview
Total images in all categories: 11,506
Total number of hits on all images: 6,514,445 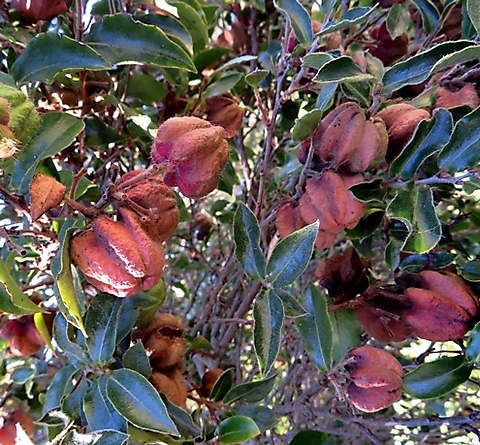 Diospyros is a genus of trees, shrubs and undershrubs in the Ebenaceae or ebony family. Some of them have a climbing habit, others yield hardwood that is highly valued. The young branch-tips are often angled.

The simple leaves are usually alternate, distichous or spiralling and papery to leathery in texture. There are no stipules.

The inflorescences grow in short-stalked to stalkless clusters, or solitary, from leaf axils. The flowers are unisexual and many species are dioecious. The calyx is deeply three- to eight-lobed, usually five-lobed or bladder-shaped and persistent, increasing in size during fruiting. The corolla is urn-shaped and three- to five-lobed.

From three to fifteen stamens occur in one or two whorls. The ovary is superior on a fleshy disc. It has from two to sixteen locules with one or two ovules hanging in each.

The gradually dehiscent fruit is a berry usually containing more than one seed. The ellipsoid seed often has a line around it, running through tip and base.

The genus comprises about 475 species worldwide, 94 of which grow in Africa and 20 in southern Africa. Asia has more, about 200 species, while Madagascar alone has 100 species.

Among Diospyros species bearing edible fruit the persimmon is notable. The various, dark hardwoods known as ebony are obtained from a few Asian and African species.