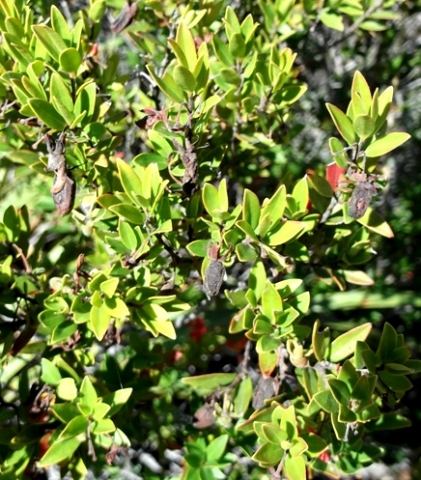 After flowering, many black or brown Diospyros glabra fruits persist while drying out on the bush until early autumn, hanging like tired Christmas decorations among the leaves. The photo was taken in Fernkloof at the end of February.

The five narrow calyx lobes are raised above the fruit in pronounced fashion as if conceding defeat, relinquishing their treasure, the ripening seeds. Those sepals formed the star-shape behind flower and fruit that brought the shrub its common name of fynbos star-apple.

For now, the seeds are still concealed in their devastated covering that was once a grandly red or purple, ovoid berry (Coates Palgrave, 2002; Van Wyk and Van Wyk, 1997).