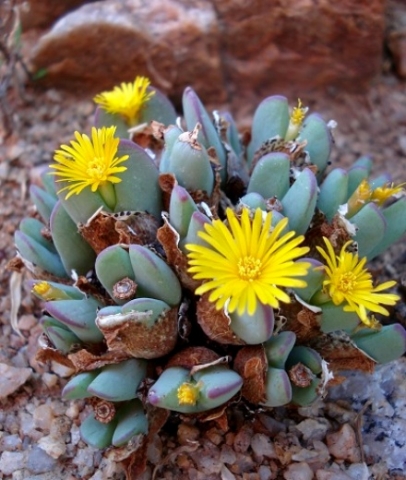 The leaves of Conophytum bilobum subsp. bilobum var. bilobum are more blue-grey in this photo than in the other one in this Album. The erect leaf-pairs or fused lobes are fairly triangular in cross-section in their top sections, barrel-like in the lower fused part. The brown and dry husks around the leaves are the skins of leaves of last season. These old leaf remains envelop the new leaves during their early development as inherited protective cloaks. Some small, dried capsules with circular tops, containing seeds from earlier flowers, can be seen among the leaves.

This plant is found in Namaqualand and the Richtersveld, right to the coast. It also grows in the south of Namibia. This photo was taken in April north-east of Okiep. The plant has a stable population in its distribution area early in the twenty first century (www.cactus-art.biz; iSpot).