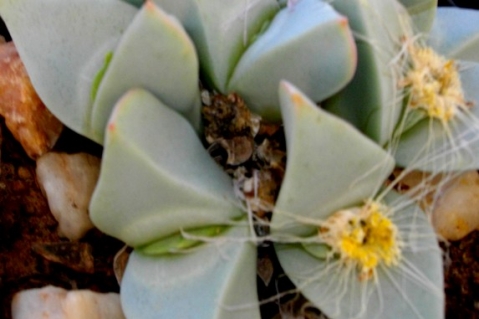 The Conophytum herreanthus subsp. herreanthus distribution is limited to a small region of Namaqualand between Steinkopf, Vioolsdrif and Port Nolloth. But don’t look for it there, for as far as is known no plant of this taxon, of this kind, remains in nature anywhere. This is so, despite efforts of years ago at reintroducing the plant in the same place, its natural home.

From centres of endemism, our world is developing vacuums of endemism, devoid of living species. Cowboy films of the future may show cattle thieves being pursued over bare, leafless desert only. But what will their horses and the cattle eat? Let animation in movies grow faster!

The specific vacuum in the case of C. herreanthus subsp. herreanthus was caused directly by human greed. The site had become known to too many irresponsible horticulturists that depleted the one stand of this plant known in nature. These horticulturists were successful, did their thing and made their money. This plant is therefore a captive freak only today, growing in many human living environments around the world, tended by people for looking at “nature”. Do we really want a world with admired plants only in pots for sale?

This is the kind of story everyone is going to read more and more as climate change, economic progress and human population numbers continue their current trends on earth. Our grandchildren will see fewer plant and animal species, but more people wherever they look, living uncomfortably.

What their grandchildren in turn will see, requires projection of the straight line (and worse), or strong fantasy: More extreme and unattractive living conditions will prevail if everything continues in the same fashion still by that time, or some dramatic change will have come: Either deep trouble for the survival of humanity itself if they had not responded to the challenge, or people’s behaviour and management of their planet will be drastically improved. Or a bit of both.

The photo accompanying this text is not so bright, but that fits a bleak outlook. It may serve as one of the many signals needed for stirring greater resolve in citizen motivation (www.redlist.sanbi.org).