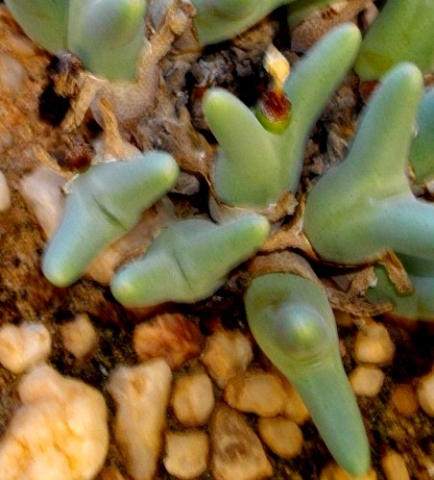 Previous
Image 5 of 60
Next

If the identification of this plant as Conophytum bilobum subsp. bilobum is correct, there are still four varieties within this subspecies to choose from for arriving at the full answer in current terms. Further form differences within one or more of these varieties may evolve one day, the differentiation process being alive and ongoing as long as there are some plants of a species breeding somewhere on earth.

Some classifiers tend to lump things together that are roughly similar; others split things into separate categories even though they display only tiny differences. The lumpers differentiate less, the splitters more, in accordance with their respective personal traits. The lumper-splitter dichotomy (or continuum) originated in Darwinian writing in the nineteenth century. It persists as individual differences living in the work of observers that either introduce new names into or delete them from the descriptions of living entities.

People won’t classify their blond and brunette, tall and short, intelligent and not, etc., relatives or neighbours as different subspecies. All those can interbreed after all. Interbreeding happens even among similar species, let alone subspecies, varieties and forms. This arbitrariness in specific classification of all the living on earth fills books and dialogues.

What happens there doesn’t inhibit or inspire any living species (other than the humans), from modifying its procreative habits, always aimed at maximising the survival of offspring.

And how do people deviate from the rest? By being a brain-driven or brain-dominated species, people tend to develop a fascination, even an obsession with notions that enter the mind. Every tenth to hundredth interesting or promising idea develops its durable supporter group, even crusading battalion, among people. These ideas, lasting for some time, grow products and followings directly or indirectly, used in modifying the physical world, even the appearance of particular human race groups, according to preferences and taboos of a particular era. Or they morph into spiritual and fantasy worlds, growing indirect products all over the place, doing the same, i.e. modifying the appearance of the physical world.

Nature as it existed before people started to think in a big way, is now a residual, decreasing phenomenon on earth and around it. Human nature is replacing that original Nature we all like to refer to as if it were still intact and “forever” with its own, "improved" version.

A confrontation is therefore approaching between the man-made “nature” in the ecosphere around the earth and the original Nature that spawned humanity as a mother. In this confrontation, all the living (Nature) is collectively positioning itself for an end-game against people and their self-centered "nature", in a mammoth looming survival game. The game? Something like chess, go or bridge, for people sometimes think and sometimes think they do. People fancy themselves as good at thinking games, the brain being their specific survival tool.

Humanity pitched against all the rest is slowly becoming aware of its strategic position as a species, how the battle lines have slowly, surreptitiously been drawn. Signals in climate change, depletion of resources, mutation of viruses, standing room availability in the delectable spots on earth, etc., all give clues. As people know from their history, human wars can be fought with blind courage or avoided by visionary truces and agreements. They still have this brain tool or toy after all.

There are already greens among the people rooting for Nature to win against the people’s improved "nature" of economic progress. If betting were allowed in the Restaurant at the end of the Universe, this might have become the last significant economic fling of humanity.

Hoping to avoid a complete obliteration of their species, a second chance in a very different beginning, is just the natural way of the brain to make thoughts flow where even water can't. So, some are working on peace agreements for our time.

But as the situation deteriorates, bargaining power against Nature decreases. It may be prudent, in the fight of "nature" against Nature, to back the latter. For Nature holds trumps (Wikipedia; Douglas Adams, 1980).