Home » GENERA C » Conophytum » Conophytum ficiforme
Back to Category Overview
Total images in all categories: 11,538
Total number of hits on all images: 6,618,677 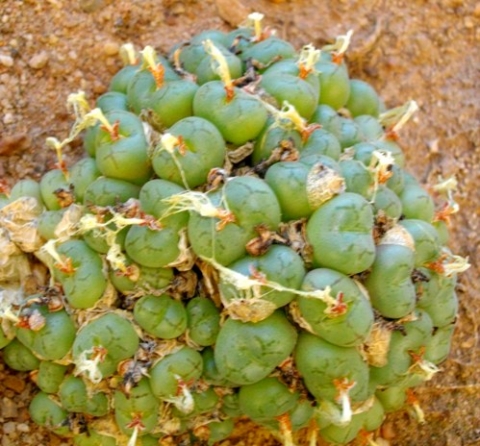 The shape of the leaf-bodies gave the plant its specific name of ficiforme (Latin), meaning fig-shaped. A leaf-body becomes about 2 cm tall and 4 cm in diameter. Pink, white or magenta flowers are produced during late autumn or early winter. After flowering the plant in picture shows leftover flowers from nearly every leaf-pair slit, the mouth-like opening between the two halves of the leaf-body.

The plant is endemic to the Robertson Karoo where it grows in the valley of the Breede River, the mountains north of Worcester, also near McGregor and Bonnievale. The habitat is steep slopes, rocky outcrops and crevices where the plants grow in shale, tillite or quartzite, thriving in semi-shade of rocks and shrubs. Winter rain brings growth and blooming, summer heat is faced with old leaf skins shielding new growth and the abundant succulence that sustains the plant during dormancy.

Some of these gradually disappearing dry skins are still visible in the gaps between leaf-bodies. The photo was taken in June near Worcester. The species is not considered to be threatened in its habitat early in the twenty first century (Bond and Goldblatt, 1984; Wikipedia; www.plantzafrica.com; www.redlist.sanbi.org).