Home » GENERA C » Conophytum » Conophytum breve
Back to Category Overview
Total images in all categories: 10,855
Total number of hits on all images: 5,509,109 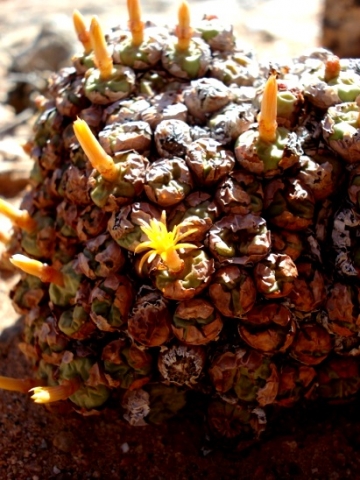 Previous
Image 9 of 60
Next

Conophytum breve grows into a dense clump of fused leaf-pairs. The dome-shape of conically united leaves seen in the photo reminds of some South African vingerpol (finger tuft) euphorbias. To reach this shape the leaves have to acquire some length and branching from the basal rootstock.

Leaf succulence sustains the plant through the dry summer. The leaves are still sufficiently supplied to flower in autumn, before the new season's grey-green to blue-green leaves push up through the dry, papery husks of last year’s used up leaves. This process begins at bloom time with the first shower, completed during the rainy winter.

Now the plant sheds the desiccated coating of protective husks, to show off its globose new leaf tops. The leafy dome, replete in spring with provisions for another hot, dry season, inspires confidence for being up to the task ahead. If the winter rain had come!

Leaf bracts may be hidden, but are always present in Conophytum, absent in Lithops.

The flowers emerge from the slits on top of the leaf pairs. They grow solitary, the corolla supported by an erect, sturdy tube of the fused, fleshy sepals. The sepals have acutely pointed, papery tips. The flower colour of this Conophytum varies in different shades of yellow.

The plant population is stable in its Northern Cape semi-desert habitat, the only place where it occurs in nature. This specimen was seen flowering in April, west of Springbok, halfway to the Atlantic (Smith, et al, 1998; iSpot).