Home » GENERA C » Conophytum » Conophytum bilobum
Back to Category Overview
Total images in all categories: 10,855
Total number of hits on all images: 5,508,968 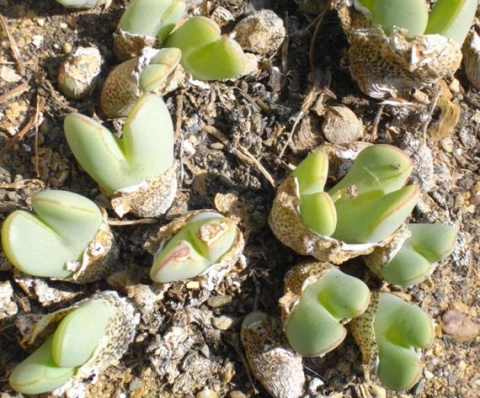 Previous
Image 2 of 60
Next

Conophytum bilobum is named for the two characteristic fleshy leaf-lobes that fit tightly together. This pair lasts for one winter growing season. In spring when the temperature rises, it is replaced by a new pair from the base of the branch. (Every branch culminates in one leaf pair.) The old pair shrivels up, serving as a protective cover throughout the summer as it gradually releases its resources to its successor. The new pair of lobes, which in turn produces a yellow winter flower repeats the annual cycle.

Conophytum flowers differ from other Aizoaceae ones by the petals joining each other in a tube around the ovary, style and stamens. It is a large genus with about 88 species, many leaf shapes and flower colours (Smith, et al, 1998). C. bilobum flowers are comparatively large for the genus, scentless and only opening in sunlight.

C. bilobum has been described as the most variable within the genus (www.cactus-art.biz). The lobes are triangular and keeled with red, green or purple edges. The leaf surface may be smooth or spotted, blue-green or brownish pink (www.succulents.co.za). The plant grows in the northwestern parts of the country, south of the Gariep River and parts of Namaqualand.