Home » GENERA B-C » Brunsvigia » Brunsvigia radulosa
Back to Category Overview
Total images in all categories: 9,579
Total number of hits on all images: 4,304,151 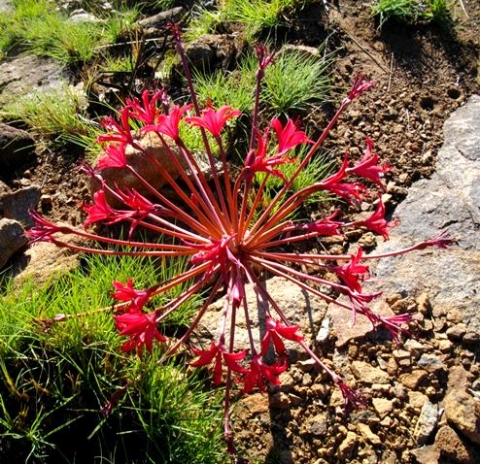 Flowering in rocky grassland while still leafless in January, this Brunsvigia radulosa umbel is extending its bloomtime: The older, lower flowers that opened first are gone, their ovaries swollen or swelling into triangular, club-shaped fruits on elongated pedicels, while later flowers are still reaching their peak.

Such a hemispherical umbel of B. radulosa bears from 30 to 75 flowers, becoming from 48 cm to 72 cm in diameter. The inflorescence may reach a height of 80 cm.

The species distribution is widespread, lying mainly in the eastern and central South African grassland. The only province in which the species does not seem to grow naturally is Limpopo. These plants are also found in Lesotho, Swaziland and southern Botswana. The species is not considered to be threatened in its habitat early in the twenty first century (Duncan, et al, 2016; www.redlist.sanbi.org).