Home » GENERA B-C » Brunsvigia » Brunsvigia radulosa flower of the lighter variety
Back to Category Overview
Total images in all categories: 9,590
Total number of hits on all images: 4,314,358 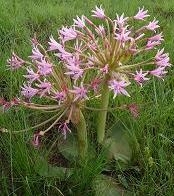 Brunsvigia radulosa is found widespread in summer rainfall areas of South Africa and some neighbouring countries. The plant is similar to B. natalensis.

An inflorescence may have over 70 individual flowers when well developed. Colour variations range from pale to dark pink or purple. The dry umbel in which the florets turn to fruits on sturdy stalks can hold its shape and roll great distances over grass-veld upon becoming detached from the plant base, distributing seeds as it moves. This makes it one of the well-known tumbleweed plants.

B. radulosa can be grown from seed, but the waiting period may be eight years before flowering. Those that try do not expect instant gratification, rather like those that plant trees under which they do not expect to sit. Because somebody dead and forgotten planted trees we can all sit under today!