Home » GENERA B-C » Brunsvigia » Brunsvigia orientalis on a dune at Vermont
Back to Category Overview
Total images in all categories: 9,903
Total number of hits on all images: 4,607,228

Brunsvigia orientalis on a dune at Vermont 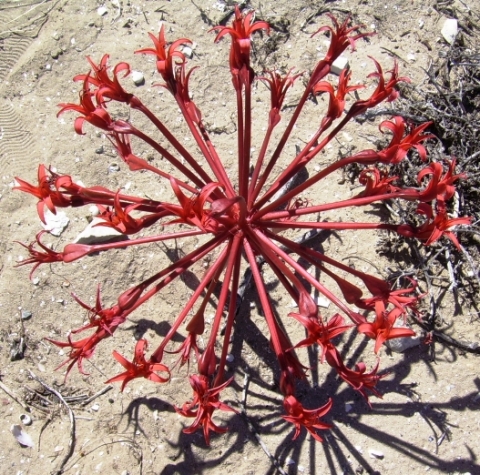 An open coastal dune where the leaves can spread on the sand and the flowerhead may enjoy unimpaired sunlight is one of the places in which to search for Brunsvigia orientalis flowers during February or March; sometimes still in April.

Each flower is presented at a jaunty angle upon its pedicel, mostly upturned, above the already prominent ovary at the pedicel tip. The triangular shape of the ovary in cross-section contrasts with its gradual tapering into the pedicel. At the other end of the ovary an abrupt tip occurs, which will soon be more conspicuous when the faded flower drops off in a few days. Seeds are already being formed in some of the three-chambered ovaries.