Home » GENERA B-C » Brunsvigia » Brunsvigia radulosa tepals
Back to Category Overview
Total images in all categories: 9,590
Total number of hits on all images: 4,314,529 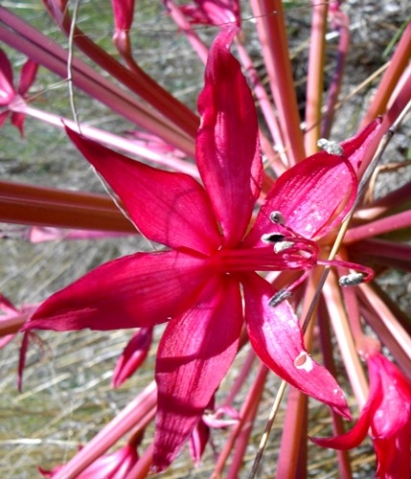 This deep pinkish red flowering form is one of the shades Brunsvigia radulosa presents in parts of its large geographical distribution. Some of them are much paler.

The six tepals spread widely, but not radially symmetrically, i.e. the flowers are laterally symmetrical, called zygomorphic. The tepals are oblong to lance-shaped, tapering to acutely pointed tips from the broad mid-section. Parallel vein lines appear furrowed upon the slightly rough tepal surfaces, showing some dull shine. Some of their margins are slightly wavy. Tepal dimensions are up to 55 mm by 12 mm.

Behind the flower the sturdy pedicels of many flowers can be seen, radiating straight from the inflorescence centre to position their flowers for both maximum sunlight and best visibility to attract passing pollinators. The pale pedicels have little green colouring here; they may be pale to dark green. Pedicels become up to 30 cm long (Duncan, et al, 2016).