Home » GENERA B-C » Brunsvigia » Brunsvigia striata
Back to Category Overview
Total images in all categories: 8,883
Total number of hits on all images: 3,861,999 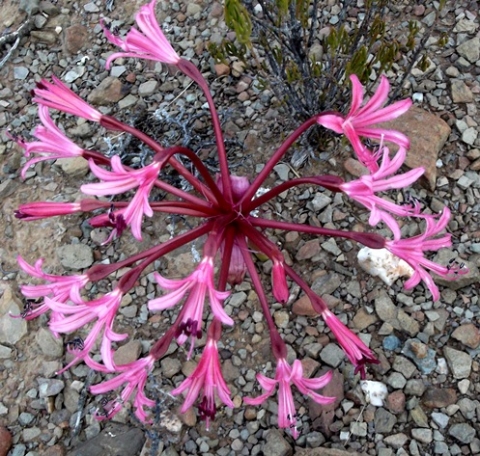 Brunsvigia striata, commonly known in Afrikaans as kleinmaartblom (small March flower) and botanically earlier as B. minor, is a deciduous, bulbous perennial. Leafless when flowering, the winter-growing plant produces an umbel-shaped inflorescence reaching heights from 15 cm to 45 cm in height.

The globose bulb is 3 cm to 5 cm in diameter, growing solitary. There is no neck at the top of the bulb, or it is short, up to 1 cm long. The bulb is subterranean, its dark brown outer tunics membranous and brittle.

The inflorescence is a spherical umbel bearing from seven to thirty flowers. The umbel diameter is 12 cm to 22 cm. The pale green to reddish brown peduncle may be up to 15 cm tall and 1 cm wide. The darkest floral parts remaining here from the deep maroon buds are the purple anthers and the bases of the flower pedicels.

The species distribution is from the Bokkeveld Mountains and Ceres in the Western Cape to Steytlerville and Humansdorp in the Eastern Cape. This photo was taken near Montagu, late in March.

The habitat of the species is fairly arid, the plants growing in the open on sandstone flats and plateaus, rocky outcrops or stony slopes. Soil variation includes from doleritic clay to loam and sandy soils. The species is not considered to be threatened in its habitat early in the twenty first century (Duncan, et al, 2016; Manning and Goldblatt, 1997; iSpot; www.redlist.sanbi.org).