Home » GENERA B-C » Brunsvigia » Brunsvigia orientalis of a paler hue
Back to Category Overview
Total images in all categories: 8,960
Total number of hits on all images: 3,972,342

Brunsvigia orientalis of a paler hue 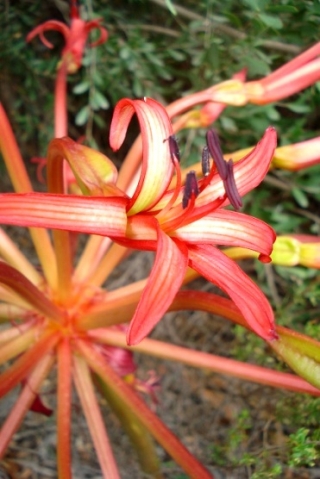 There is also this orange coloured form of a Brunsvigia orientalis flowerhead. This one was found near Gansbaai during March. Note the dissimilar tepal colouring found in the same flower, including sections of pale cream, pink and shades from the wide range of reds.

The ridged oblongs of purple anthers are clearly in evidence here. Uneven recurving among the tepals is apparent as well. The pedicels are paler than on other specimens photographed for this Album (www.plantzafrica.com).