Home » GENERA T-Z » Tritoniopsis » Tritoniopsis ramosa flowers
Back to Category Overview
Total images in all categories: 10,855
Total number of hits on all images: 5,508,068 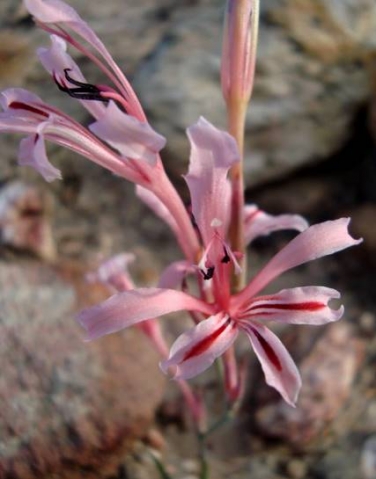 The tepals are joined at the base, the corolla tube from 8 mm to 20 mm long and the flower two-lipped. The long, narrow tepals have darker pink or red markings, in picture only on the lower three and not reaching the tips. The markings sometimes have elongated, white islands in the red, absent from the flowers in picture.

Dark anthers and three white style branches curve below the longer dorsal tepal in the photo.

Flowering happens from around midsummer to after midautumn (Vlok and Schutte-Vlok, 2015; Manning, 2007; Bond and Goldblatt, 1984; iNaturalist).