Home » GENERA T-Z » Tritoniopsis » Tritoniopsis parviflora
Back to Category Overview
Total images in all categories: 11,131
Total number of hits on all images: 5,810,290 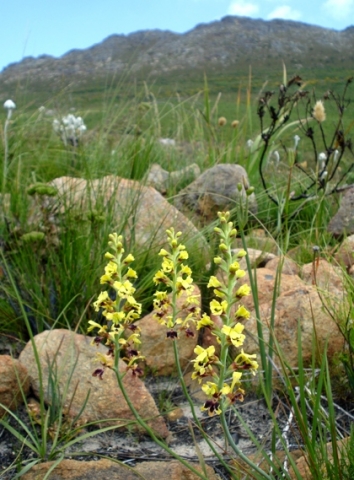 Tritoniopsis parviflora, in Afrikaans known as the pepersouskousie (little pepper sauce sock), is a slender perennial reaching heights between 15 cm and 40 cm. The plant grows narrow leaves with one or two veins and without a central midrib.

The distribution ranges from the Cape Peninsula northwards to Clanwilliam and east to Bredasdorp. This photo was taken near the foot of Sir Lowry’s Pass in October.

The habitat is sandy and rocky slopes in fynbos. Neither of the two recognised varieties of T. parviflora is considered to be threatened in its habitat early in the twenty first century (Manning, 2007; Bond and Goldblatt, 1984; iSpot; http://redlist.sanbi.org).