Home » GENERA T-Z » Tritoniopsis » Tritoniopsis parviflora colours and shapes
Back to Category Overview
Total images in all categories: 10,855
Total number of hits on all images: 5,508,189 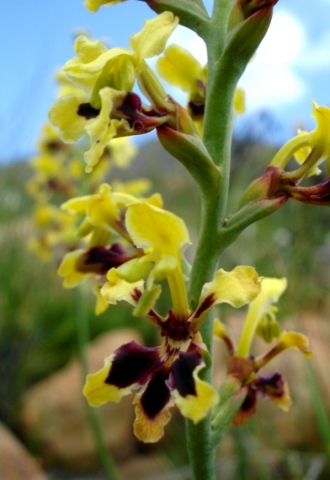 The two-lipped flowers of Tritoniopsis parviflora grow in a spirally twisted spike. The corolla tube is about 4 mm long. Two green, overlapping bracts hold the stalkless base of the flower, the inner one being slightly longer.

The six tepals forming the corolla are roughly spoon-shaped, their margins wavy. The lower three have large maroon to black markings, only their tips being yellow or turning brown with age. The upper tepals have longer narrow bases, the central one lacking the lesser dark markings of the lateral pair.