Home » GENERA T-Z » Tritoniopsis » Tritoniopsis triticea
Back to Category Overview
Total images in all categories: 11,131
Total number of hits on all images: 5,810,222 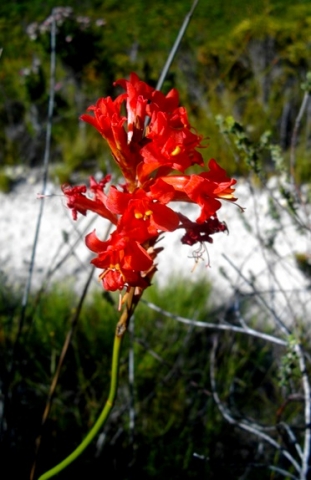 Tritoniopsis triticea, previously known as Anapalina triticea is commonly known as the summer snakeflower, in Afrikaans as the rooibergpypie (little red mountain pipe). It is a cormous perennial growing a flower stem up to 90 cm tall.

The three-veined basal leaves are lance-shaped and narrow apart from their slightly wider mid-sections. The leaves become brown at bloomtime. The specific name, triticea, is derived from the Latin word triticum meaning wheat. Maybe the significance of the name is the brown leaf colour when flowering.

Tubular, scarlet flowers are borne in a dense, spirally twisted spike, subtended by bracts. The curved tubes become up to 3 cm long, the small, spreading tepal lobes rounded and curving. Flowering happens from midsummer to mid-autumn.

See the Disa ferruginea postings in this Site for a nifty mimicry arrangement between two plants and a butterfly, crafted in evolution over many generations.

The species is distributed in the southwestern Cape, from the Cape Peninsula to George, endemic to the Western Cape. The habitat is rocky fynbos slopes. The species is not considered to be threatened in its habitat early in the twenty first century (Manning, 2007; Bean and Johns, 2005; Andrew, 2017; iSpot; www.redlist.sanbi.org).