Home » GENERA T-Z » Tritoniopsis » Tritoniopsis ramosa
Back to Category Overview
Total images in all categories: 11,037
Total number of hits on all images: 5,689,591 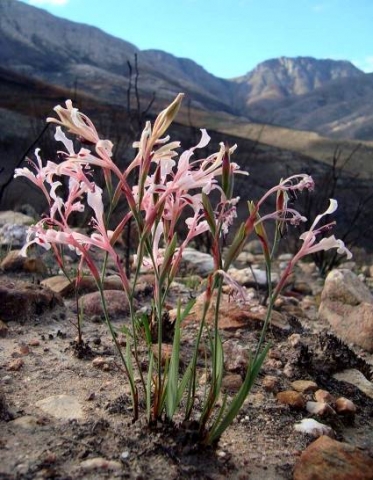 Tritoniopsis ramosa, commonly known in Afrikaans as the rietpypie (little reed pipe), is a slender perennial that branches, reaching heights from 12 cm to 50 cm.

The narrow leaves (up to 1 cm), are linear to sword-shaped with one to three longitudinal vein ribs upon each. In the photo the leaves seem to be developing later than the flowers. Flowering is most prolific after fire.

The species distribution is mainly in the Western Cape from the Cape Peninsula northwards to around Clanwilliam and the Cederberg, eastwards to the southern Cape, into the southern mountains of the Little Karoo and the Eastern Cape as far as Humansdorp.

The habitat is montane fynbos on sandstone. None of the three varieties into which T. ramosa has been subdivided is considered to be threatened in its habitat early in the twenty first century (Vlok and Schutte-Vlok, 2015; Manning, 2007; Bond and Goldblatt, 1984; iNaturalist; http://redlist.sanbi.org).