Home » GENERA M-O » Nemesia » Nemesia cheiranthus
Back to Category Overview
Total images in all categories: 11,029
Total number of hits on all images: 5,676,598 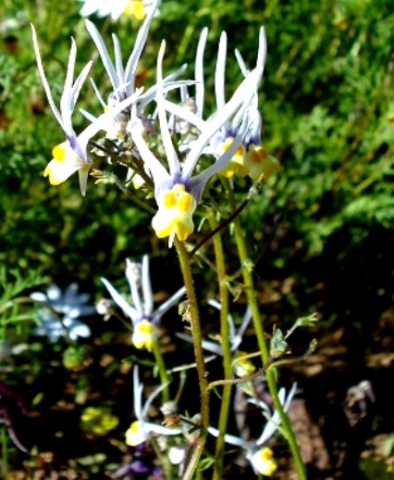 Previous
Image 3 of 26
Next

Nemesia cheiranthus, the long-eared nemesia, is a slender annual herb that grows to 40 cm. The leaves, mostly basal, are elliptic or lance-shaped and toothed.

The flowers grow in loose racemes. The upper lip of the flower consists of four white long narrow petal lobes, sometimes marked with mauve at the base. The broad, bulging, yellow lower lip has two raised, velvety crests near its base. It also has a pointed, straight and short spur below. Flowering happens at winter’s end and early spring.

The species grows in Namaqualand and as far south as Piketberg. The habitat is sandy slopes and flats. The plant is not considered to be threatened in its habitat early in the twenty first century (Manning, 2009; Manning and Goldblatt, 1997; http://redlist.sanbi.org).