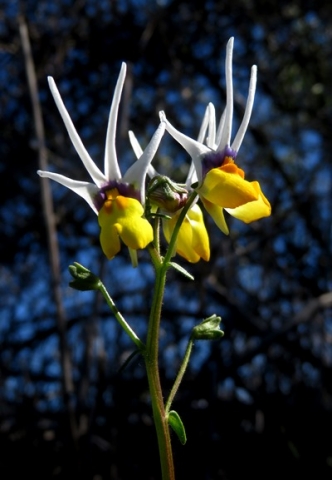 Previous
Image 7 of 26
Next

Called long-eared nemesia, the Nemesia cheiranthus flowers clearly have horns as well as ears; that is if the four narrow upper petal lobes should not be regarded as a crown. These three kings, proudly yellow-bearded, gaze out over their Namaqualand floral kingdoms, unperturbed about sharing their riches during a reign as short as theirs. Rulers the world over tend to misjudge the briefness of their seasons.

Another common name for this plant, the long-mane lionface, may also take root.

The base of the upper lip is narrowly marked bluish purple. The yellow lower lip has a deep central slit at its base, more than a notch, dividing it into two lobes. The two bulges near the top of this lip, orange here, are generally repeated in Nemesia species.

These flowers have spurs, visible in the photo: narrow yellow cones, slightly skewed, protrude from the back of the corollas, pointing down behind the lower lips (Manning, 2007; iNaturalist).