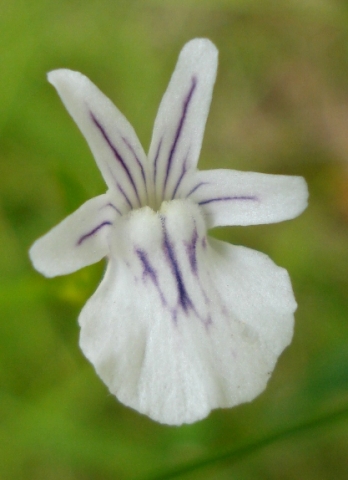 Previous
Image 7 of 23
Next

Nemesia diffusa is a perennial growing to 45 cm. Its opposite leaves are three to five-veined.

The flowers are white with dark purple line markings. The upper lip has four almost oblong lobes, their tips rounded. The lower lip is larger, broad with rounded tip and tapering to the base where it joins the corolla tube. This lower lip has a couple of bulging patches below the mouth. Some flower forms occur in which these raised patches are yellow. There is a spur at the back of the corolla. The calyx is five-lobed. Flowering happens from spring to mid-autumn.

The distribution in the Western Cape ranges from Paarl to Worcester and Caledon, reaching the coast at Hermanus. The photo was taken in Fernkloof during October.

The plant grows on sandstone mountain slopes. The species is not considered to be threatened in its habitat early in the twenty first century.

There are two varieties, var. diffusa and var. rigida (Bond and Goldblatt, Bean and Johns, 2005; iSpot).