Home » GENERA M-O » Nemesia » Nemesia caerulea
Back to Category Overview
Total images in all categories: 10,596
Total number of hits on all images: 5,234,650 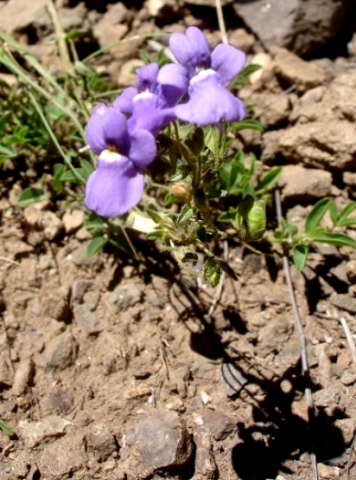 Nemesia caerulea, the Drakensberg nemesia, is a perennial herb with scented, blue or purple flowers. The plants have a compact growing habit; a blooming one may be densely covered in flowers. The dark green, serrated leaves are ovate, tapering to acute tips.

Flowers grow on erect leafy racemes from leaf axils. Corollas are two-lipped in typical Nemesia fashion, without the yellow bumps on the lower lip. Flowering happens in midspring and early summer.

N. caerulea is found in southern KwaZulu-Natal, the north-eastern extreme of the Eastern Cape, the north-eastern Free State and Lesotho. The habitat is montane grassland among rocks. The species is not considered to be threatened in its habitat early in the twenty first century (Manning, 2009; Wikipedia; http://redlist.sanbi.org).