Home » GENERA M-O » Nemesia » Nemesia anisocarpa
Back to Category Overview
Total images in all categories: 10,596
Total number of hits on all images: 5,234,597 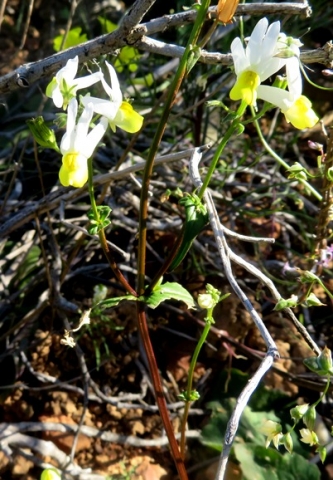 Nemesia anisocarpa is an erect annual reaching 40 cm in height. The stem in picture is reddish and ridged in its lower part. The leaves are lance-shaped to elliptic with toothed margins. Leaf dimensions are about 2,5 cm long by 1,5 cm wide.

Narrow, green, finger-like sepals spread against the back of the corolla. The two-lipped flowers here are white on the four-lobed upper lip and yellow on the broad lower one. Colour of the bicoloured N. anisocarpa flowers generally varies among white, pink and orange on the upper lip and more or less yellow on the lower one.

Two cushion-like, hairy bulges are present at the base of the lower lip and a slender, tapering spur of about 3 mm long protrudes behind. The flower is about 1 cm in diameter. Flowering happens late in winter or early in spring, later depending on region and rain.

The fruit is longer than wide, oblique at its base. The specific name, anisocarpa, is derived from the Greek words aniso- meaning unequal, asymmetrical or uneven and carpos meaning fruit, referring to the fruit shape.

The species distribution is in the west of the Northern Cape and the northwest of the Western Cape, coastal as well as inland and extending into the south of Namibia.

The habitat is stony slopes and flats on clay or loam soils. The species is not considered to be threatened in its habitat early in the twenty first century (Vlok and Schutte-Vlok, 2015; Manning, 2009; iNaturalist; http://redlist.sanbio.org).