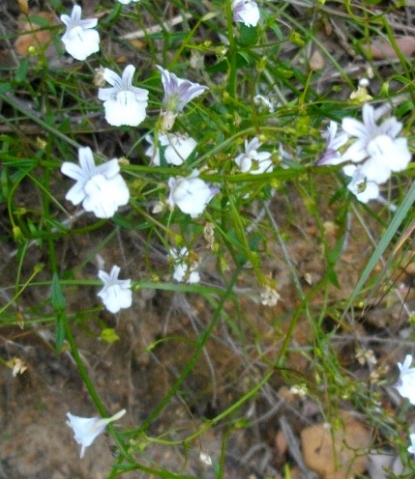 Previous
Image 8 of 23
Next

This Nemesia diffusa var. diffusa plant was found flowering in Fernkloof during October. It is a short-lived perennial that grows tangled stems to 30 cm in height.

The leaves are opposite, narrowly lance-shaped with toothed margins. Three to five veins start at the leaf base.

The white to pale lilac flowers have dark veins running vertically across the lower lip. Flower stalks and sepals are finely hairy. Flowering happens from late winter to mid-spring.

The distribution is in the Western Cape. The plant grows in shady spots among fynbos, probably where it tends to be damp. It is thought to have a stable population, not considered threatened in habitat early in the twenty first century (iSpot; www.fernkloof.com; www.redlist.sanbi.org).