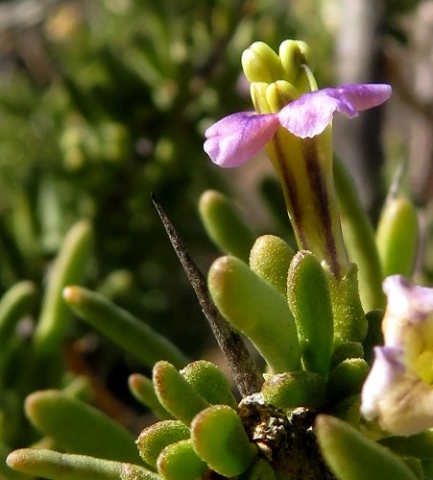 Lycium, commonly known as box-thorn, honey-thorn or desert-thorn and in Afrikaans as kriebos or kriedoring, is a genus in the Solanaceae or potato family, comprising about 100 species of shrubs or small trees. About 16 of them occur in southern Africa; most parts having some.

Most lyciums grow in temperate or subtropical parts of South America, some in North America and southern Africa, while there are a few across Europe and Asia, one in Australia.

The branches are often spiny, the leaves often in fascicles. Lyciums differ from the potato in their flowers being tubular. The berries are often red. The plants may be evergreen but typically shed their leaves in drought.

The calyx has three to five lobes that are unequal in some species. The corolla is four- or five-lobed, the tube bell-shaped, urn-shaped, funnel-shaped or cylindrical. The corolla lobes are much shorter than the tube, particularly among the southern African species.

There are four or five stamens, exserted or not, alternating with the corolla lobes. The ovary has two locules; the style is terete and the stigma variable among the species. The fruit is a globose, conical or ovoid berry, the seeds nearly spherical.

The plant in picture with round-tipped, fleshy leaves and a long corolla with short calyx is thought to be Lycium pilifolium. There is a fierce spine in picture, as well as exserted anthers above the rounded, pale mauve-purple corolla lobes (Vlok and Schutte-Vlok, 2015; Leistner, (Ed.), 2000; iNaturalist).